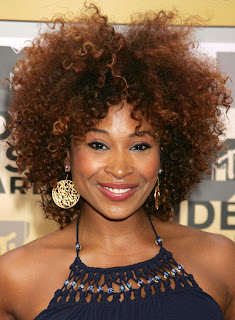 The hair issue seems to be raising its ugly head again. With the recent release of the new Chris Rock film: “Good Hair” the conversation again turns towards the importance that black women place on their crowning glories. The amount of money that women, black women in particular, spend on their hair according to the film is staggering. We spend billions to have our hair "fried, dyed and laid to the side” as they used to say, and because of that, we are NOT going to mess it up. I know women who have claimed to develop awkward sleeping positions, like propping pillows up behind them, so that they could sleep sitting up. Or one young lady I know who claims to sleep with her head hanging off the bed so that she doesn't "smoosh" her do. I for one like a good night's sleep, so I'm not about to allow a style to get in the way of my dreamtime, so the most that I will do is to sleep on a pillow with a satin cover or pull it up at night with a satin scrunchie. Yes fashionistas, I did say scrunchie, and mind you, it's only for sleeping and doesn't go outside of the house. ;-)

In that same vein, a hairstyle has never kept me from the gym or my regular workouts. My personal stylist is very used to me saying to her, make it cute enough to last me a day, because it won't make it past the week-end. And many of my colleagues who see me with a straightened style know not to get used to it 'cause it won't look like this tomorrow. 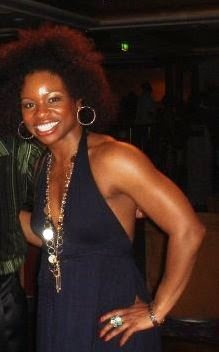 Allegra Feamster rocking a 'fro on the Tom Joyner Fantastic Voyage Cruise 2009. this style worked well with my teaching and performance schedule on board the cruise.

I joke about that aspect, but it's true and very real. If you talk to most Fitness Professionals, especially those who have experience working with black women, the number one reason that they give for not working out is "they don't want to mess up their hair". To that I say, get over it! Maybe at one time that may have been a weak but valid excuse, but nowadays women have so much freedom to play with different styles. With the teaching schedule that I maintain, I work out regularly and still maintain a great appearance from head to toe. The trick is experimenting and finding hairstyles that work well with your lifestyle. You can braid it, get a weave or extensions, buy a ponytail, a wig, wear it natural as a fro, locks, twists. There are so many options, but just don’t let the hair issue get in the way of your health. At the rate many of us are going we will be good looking corpses faster than you know it. Imagine the conversations at the funeral, “she was so young…but her hair was always fierce”. Some how I just don't think that's how it will play out. At that final stage, who will care about your hair? Your fly and fierce hairstyles won’t make a difference when you're not there to enjoy life with your loved ones, especially for reasons that are preventable! For those ladies who get it, I applaud you. I've seen some of these ladies get really creative. Before class they go into the locker room and carefully wrap their hair, and some have even rolled it up in curlers and covered it up with a scarf to keep it in style. When I see them after class or their workouts, they'll smile at me and say, "I love looking good, but I need to work it out and that's more important." What's even better about this whole scenario is that the guys at the gym who see this actually don't mind. Their response is," I can't get mad at a woman who puts her health before beauty and a hairdo". Did you hear that ladies? They're more impressed that you're working it out!

This summer I taught at a fitness event outdoors and it poured cats and dogs. I waited for the director of the event to tell me to stop the workout, but he said keep it going and so we did. Although we lost a few women to the elements, the majority stayed until the very end. And when the rain cleared I said, “Well, that eliminates excuse number one…the HAIR ISSUE. If you ladies can work it out in the rain, you have no more reasons to EVER use hair as a reason to forgo you workout again." They all laughed, but they knew it was true. 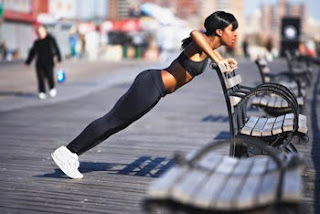 With hair pulled back, she's ready to go!

So why is this so much of an issue? According to statistics from the Centers for Disease Control and Prevention (CDC), 80.5% of black women in the United Sates are considered overweight while 54.3% are clinically obese having a body mass index (BMI) higher than 30. At these raised levels, that means that 80.5% of black women are at a higher risk for weight-related illnesses or chronic conditions that are exacerbated by higher weight levels such as Diabetes, Hyper-tension, Heart disease, Cancer and Stroke. Have the freedom to wear your hair in whatever fashion you choose, but please ladies, do not let it get in the way of your life! As the old saying goes “over my dead body…” if a change in habits does not occur today, that may be sooner than you think.

Posted by The Body Beautiful by Allegra at 11:56 PM 1 comment:


We'd like to thank our friends over at NDH Chicago for a great time Saturday. We had a fun in the studio as I had a chance to talk with our Twenty-somethings Generation about fitness and living healthier lifestyles today and not waiting until you're a thirty or forty something to make the change. As we know..., what we do today sets us up for every tomorrow. We had a wide range of topics for discussion as well as questions from some of the in-studio audience. Some of my favourite topics hit: Acidity and alkaline levels in the body, and the effects of sodium on the body. Kudos to Quintin and Nobody Dances Here for putting on a great show. Check it out..
Posted by The Body Beautiful by Allegra at 12:11 AM No comments: