Michelle Obama: She's Got Legs and She Knows How to Use Them 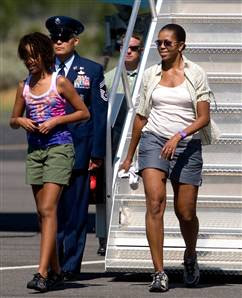 Every time I see this picture I think of the ZZ Top song from the mid-80's.

So, here we go again it seems. First there was much ado about our First Lady's right to bear arms, which are fabulous by the way. And now there's all of this craziness about her legs, again fabulous! If you haven't heard the stories, the Obama's were vacationing at the Grand Canyon and Mrs. Obama emerged from Air Force One in... (Gasp!) SHORTS!!! “How could she?” Some remarked. How could she? Here's how.

First, let's just take into consideration the obvious; it's Arizona, which last I checked is desert country. It's the Grand Canyon, one of the hottest (no pun intended, but it does work) tourist and vacation spots in the country, AND she's on a family vacation. What else would you wear? I don't know about you, but I think that Mrs. Obama's choice to leave the Jimmy Choos at 1600 Pennsylvania Avenue was a wise one. Those kitten heels she's known for wearing just might get in the way on one of those canyon hiking trails.

Second, the shorts, notice are mid-thigh, are tasteful and age appropriate. She's not a woman who is trying to compete with the styles of her young daughters. If anything, notice the length of Malia's shorts, very similar in comparison to her mother's. Mrs. Obama looks very casual and comfortable. This brings me to the point of why I even bothered to comment on this at all. Considering that as our tag line states, The Body Beautiful by Allegra is dedicated to creating positive, healthy and realistic body images through fitness, Michelle Obama gets our number one vote.

Countless articles have been written about how our new First Lady has influenced and inspired not only African-American women in the United States, but how she has given a voice to Women of Colour around the world. In addition, she is a strong example to women period, regardless of ethnicity, who inspires us to be our very best. Politics aside, she is revered for her intelligence, her personal accomplishments and her personal style. Michelle is an example of how today's modern woman can successfully balance an exemplary career and family, all the while maintaining a great sense of self. Mrs. Obama is committed to being that "living example" for not only her daughters, but her husband as well. In fact, it was Michelle who insisted that Barack quit smoking if he was going to pursue the presidency. In addition to holding down a family and career, the First Lady is obviously committed to her own personal health and wellness. She works out with a Fitness Trainer regularly at 5:30am three days a week. What's great about Michelle is that it is clear that she is comfortable in her own skin, and comfortable enough to show her skin. Here’s a quote that I feel sums this up perfectly:

“A woman in harmony with her spirit is like a river flowing. She goes where she will without pretense and arrives at her destination, prepared to be herself and only herself” - Maya Angelou

To that I say, Rock on Michelle, and keep rocking those arms and legs!!!
Posted by The Body Beautiful by Allegra at 1:51 AM 2 comments: 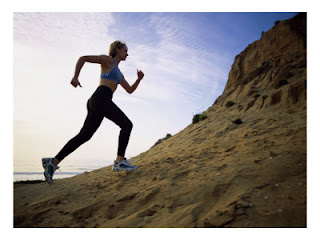 I read the attached article today and thought how timely! Just the other evening I was having dinner outdoors with a friend of mine, and at 9:00pm, we were remarking at how many night time runners there were.

To top it off, so many solo female runners, with i-pods nonetheless! During the hot summer months, the coolest part of the day is either in the morning or in the evening, but as the days get shorter, these times are also the darkest part of the day. Too often exercisers are so focused on the purpose, getting the workout in, that they forget about the safety precautions. I often advise my clients, and especially stress to the female clients, the importance of safety when working out outdoors. The same precautionary measures that you would take as woman walking alone at night or in secluded areas are the same measures that should be taken ESPECIALLY when you're working out. Why? Because potential attackers know that you are distracted and that distraction serves as a great opportunity for them to pounce! I echo the same sentiments as the Run Shoe Store owner in the article who says that your mind needs to be on EVERYTHING. Yes, it's great to listen to music and have that motivate you while running, but save the i-pod/i-touch for the treadmill. My rule of thumb, if you can't hear that squirrel scurrying up the tree, then you can't hear some one sneaking up behind you. PAY ATTENTION!

Consideration should also be taken in to what is worn for outdoor activity, from wearing clothing with reflective strips for running at night, down to the eyewear worn in the day. I have a great pair of wrap-around sunglasses that I use for running, although stylish, they allow me to see everything. No blind spots mean that I'm less surprised about whom or what enters my "space".

Extra tips that I give to my clients:

•Use the buddy system: it's been said many times "there's safety in numbers"
•Stay away from secluded areas and run in well-lit areas
•If you can, opt for the street rather than the sidewalk
•Don't talk on your phone and no texting (yes I’ve seen this, people running AND texting), it has the same effect to a would-be attacker as an i-pod i.e. distraction

Awareness is key! There’s no need to stay indoors, get out there, but stay aware and safe!

Here's a great article written by Jenice Armstrong of the Philadelphia Daily News highlighting the importance of safety while running outdoors...

http://www.philly.com/philly/phillywomen/20090820_Jenice_Armstrong__Staying_safe_on_the_run.html?referrer=facebook
Posted by The Body Beautiful by Allegra at 8:07 PM No comments: